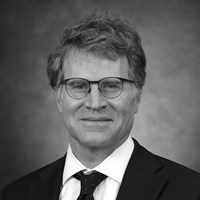 What Lies Ahead? Market Review & Outlook

Forecasting generally begins with some assessment of the current situation and trend. From there it is easier to break down the probabilities and magnitude of opportunities and impediments and the likely impact on that trend. Right now it feels like we are spinning in a whirlpool. We don’t have a very strong grasp of the current situation because as soon as we begin to develop a picture, it changes. Typically, the base case is more of the same. We definitely don’t want that. In this case, we are trying to figure out whether we get pushed out onto the rocks or into clear and navigable current.

The current situation is almost completely controlled by the novel coronavirus. As states reopened in May, there was optimism that the path was headed back to normal. Since Memorial Day weekend, the virus has reasserted itself with outbreaks in states that had largely missed the first round in March and April. The economic impact is that a tremendous amount of capacity remains latent and will remain so longer. Once the Government-issued restrictions end, there is no way to know the willingness of people to return to classrooms, offices, restaurants, and concerts.

We have discussed the idea that one of the biggest bubbles to emerge in these technologically driven times is financial information itself. We have the traditional “hard data” from the Government, which counts employment and economic output. Then there is the “soft data” from the government or related agencies that is based on sentiment acquired through surveys. Finally, there is the “high frequency data,” which can come from pretty much anywhere: airline capacity utilization and flights, restaurant reservations, credit card usage, ticket sales, etc. In the current situation, the different categories are arguing with one another. Back in April and May, “hard data” Government statistics were dismal reflecting the loss of over 20 million jobs and a faster than anticipated 4.8% decline in first quarter Gross Domestic Product (GDP) and predictions for a second quarter decline of more than 20%. “Soft data” was worse. Sentiment reflected in the University of Michigan’s Consumer Confidence survey fell to 71 from 89 in March and over 100 in February. The ISM Manufacturing Survey fell to 41 in May from 49 in April and 50 in March.  ISM Non-manufacturing fell to 41.8 in May from 52.3 in March. Think of the ISM surveys as a dial around with the several questions starting with: “How’s business?” The index of Leading Economic Indicators, which includes the performance of the S&P 500 declined 13% versus the prior year in April. Please see the chart for the magnitude of such a decline.

This is the computer age and there is a lot of data available now. This “high frequency data” started to point at better trends starting with the reopening of many states in May as cooped up consumers sought some return to normal. Consumers were making dinner reservations, booking flights, buying things, filling out job applications and doing all sorts of other things that can be measured. Two months later, the “hard data” is looking much better with 7.3 million additions to payrolls in June and July together and a moderation of the second quarter GDP forecast to about a 10% decline year over year. “Soft data” also looks much better with ISM Manufacturing recovering to a reading of 52.6; generally, anything over 50 is considered a forecast of growth in the manufacturing sector.

Coronavirus is spreading again. It is hard to say what this will do to the “high frequency data” because everyone is looking at something different. My guess is that it will hurt. Where stay at home orders have not been reversed, they are not progressing toward life as usual. Individual choice is probably a greater concern. Of course, individuals are unlikely to persist in activities if the evidence suggests that those activities are dangerous.

So why does the market continue to perform well? The 10-year Treasury yields 0.66%. All else equal, low rates equal higher stock prices. Mathematically, the 10-year yield is the basis for the discount rate applied to future cash flows to determine the present value in the most commonly used valuation framework, the Capital Asset Pricing Model. If the discount is lower, the future cash flows are more valuable. In a more practical sense, low rates make most readily available alternatives to equities less appealing because these investments rarely offer the benefit of growth, the other primary determinant of valuation. Growth comes from pricing power, market share and efficiency, all the product of capital formation and human ingenuity. Obviously, this creates winners and losers.  We are seeing that at work right now in terms of bankruptcies for some and exceptional growth for companies that enable a surprisingly efficient work from home workflow and easy and inexpensive access to the things we need.

Governments around the world have done a lot to soften the blow with monetary accommodation and fiscal intervention to maintain payrolls and help those displaced. Central bankers have committed to low rates in addition to specific programs focused on potential trouble points allowing investment and concessions that have brought significant relief throughout a system that faced deep stresses upon the outbreak of coronavirus. Most people have money to spend and investors know the Fed has their back. They have more or less said so. Income replacement is a temporary relief provided by the Federal Government. Enhanced unemployment insurance has actually increased income for many who stay at home. The program is scheduled to end at the end of July. In front of a presidential election with the unemployment rate still at 11%, there will be a great deal of support for new stimulus to maintain these unemployment benefits. We believe that investors expect the payments to continue and any deviation from that probably would be a disappointment.

As of July 8, 2020, the S&P 500 traded for 22.17x forward earnings, which is elevated versus the 15.9x 25-year average. The earnings estimates behind those multiples are $125.23 for 2020 and $162.02 for 2021 (S&P 500 earnings for 2019 were $158.97). The assumption is that something changes between now and at least the middle of 2021. This brings us back to the disease at the center of it all. The multitude and confirmation of the relevance of the ridiculous number of statistics used to evaluate the economy pale in comparison to the medical information and interpretations surrounding coronavirus. We won’t even venture a guess, but the all clear will most likely depend on a vaccine, evidence that there really is potential “herd immunity” and a quick reliable treatment. Until then, we believe it is likely that the market will be volatile, but does not need to revert to March lows. 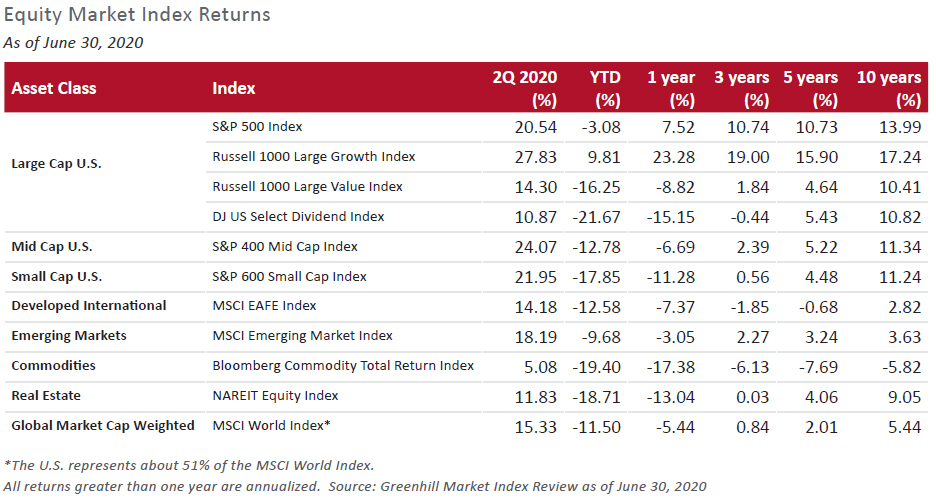 The index does not tell the whole story. Proven growth is at a significant premium while more economically sensitive value stocks remain laggards. At times like this, we believe that discipline and diverse portfolios are more important than ever. Beyond the S&P 500, small cap stocks, mid cap stocks and international stocks also remain well below February levels and the beginning of the year.

While the virus continues to receive most attention, increasingly our focus will turn to the upcoming U.S. election. Key issues will be the economy, tax policy, international trade, wealth and income inequality, the environment and of course how to best battle the virus. While the election will serve as another source of uncertainty, we note the equity market’s resilience in various economic, social and tax environments and do not believe the election should cause investors to make major changes to their long-term investment strategy.

I’m reading The Emerald Mile by Kevin Fedarko. The book looks at the history and geology of the Grand Canyon through the context of an epic flood in 1983 and a crazy man who decided that was a good time to float the Grand Canyon. A significant portion of the book discusses Major John Wesley Powell’s maiden exploration from the Green River in Utah to the Mouth of the Colorado River near the Sea of Cortez in June 1869. The thing that jumped out at me is that the men embarked knowing that between start and finish the river dropped a little over a vertical mile, but they had no idea what was between them and their destination. The journey was rough, but they did not go over any waterfalls. When they emerged from the Grand Canyon, they were hungry, exhausted and almost naked, but they were wiser and subsequent adventures have led to the well-trodden leisure trips through the canyon that so many enjoy today. I’m sure they had their doubts when they lost control of the ill-equipped boats in rapids and whirlpools, but they made it. Ultimately, they were cast out into the navigable current as innovative people and cultures usually are. I see some parallels and as an optimist, my guess is we come out wiser and better equipped on the other end of this coronavirus adventure.